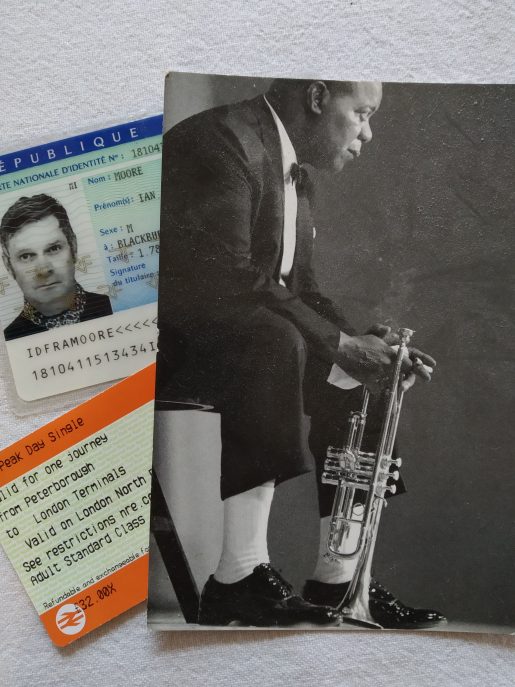 As I start to write this, I sit in an eerily quiet Gare Montparnasse. It’s one o’clock on a Saturday afternoon, my train for Tours is supposed to leave at 14.01. I say supposed, the national strikes have bled into Saturday, there is time yet for it to be cancelled, it’s happened to me before. I’ve just walked from the Gare du Nord, just under 5kms, because the Metro is shut. A few minutes ago I passed about a dozen vans of CRS, riot police, getting their pads on as it were on the Rue de Rennes and around the corner the union banners were being unfurled. There will be a clash, it seems inevitable. Because of my condition, I’m in agony. I’ve carried my case and my bag all the way, worn shoes wholly inappropriate for a rheumatoid arthritis sufferer to go yomping across a city and I feel about 100 years old. I’ve been here before, so often it’s boring, and normally by this point I’m in despair, on the edge and close to tears. Not this time though, this morning at London St Pancras at 7am, I saw the future and it’s buoyed me since.

But it’s been a long week, and it’s taken me some time to get to this stage.

It must have been such a good idea on paper to introduce pianos into public spaces. A civilising attempt at appealing to mankind’s cultural and creative side in airports and train stations, where tiredness and frustration are usually the dominant forces. A bit of gentle music to soothe the savage breast. I had been in Aéroport Charles de Gaulle for an hour and a half, I was leaving home a day early to beat the national strike and was heading, eventually that evening, to Sheffield. My mood was tetchy to say the least, so the toddler who was being encouraged by his obese parents, both wearing Mickey Mouse ears, to jump up and down on the piano keyboard, and had been for the last half hour, was coming very close to a very ugly, very gratifying demise. The journey didn’t really pick up from there. I was due to change train at Doncaster and connect to Sheffield, but the train was cancelled and so an hours wait, now 14 hours into the journey on a cold, dark Doncaster platform was a blow. Losing my tickets and being unable to produce them for inspection when a train did eventually turn up was another.

‘How do I know you’re on a connecting train from London?’ the truculent guard asked, prompting a young woman sitting opposite me to intervene.

‘I can vouch for him,’ she said to the guard, ‘I saw him in London, he’s very distinctive.’ Never mind pianos, if anything is going to soothe the savage breast of this vain traveller, it’s a compliment, which I accepted graciously though it should never have been in doubt. No offence to Doncaster but it hasn’t seen mustard tweed check frockcoats with matching waistcoat in some time. It was obvious that I must have come from somewhere else.

I peacocked a bit, and looked at the guard challengingly. I was, admittedly, a few M&S cans of Pink Fizz Pinot Grigio to the good and felt I had the upper hand.

‘My friend,’ I said haughtily and giving it the full Lady Bracknell, ‘you carelessly lost a train earlier.’

My peacock strut was short-lived. The journey door to door had taken 16 hours and by the next day I could barely walk, though walking was the least of my worries. I looked at the stage that was still being set up for that night’s gig and gulped. ‘No problem,’ I’d said when asked if I could get on the stage and do a sound check, but there was a problem, there was a very big problem and the problem was that the steps hadn’t been attached to the stage yet and the stage was stomach high.  ‘No problem,’ I repeated. I walked around to the side, hoping that one of the huge speakers would hide me from the crew for the stunt I was about to attempt. I leant forward so that my chest was flat against the stage floor and rolled gracelessly so that my legs could get some traction. The plan was then to rest for a few seconds, allow the pain to subside a little and pull myself up, emerging from behind the speaker with people none the wiser. I started to pull myself up as planned and then noticed two techies staring at me, each with a sandwich half way to their wide-open mouths, and a woman hoovering the stage who looked singularly unimpressed as if I was deliberately trying to refluff her black carpet. If only that had been the low point of the day.

My other clever plan to avoid the strikes in and around Paris was to get the train from Sheffield back down to London and fly to Tours from Stansted on the Friday. My car would be waiting for me there and I imagined myself strolling out, putting my sunglasses on and cooly walking to my car parked literally right in front of the terminal. I hadn’t banked on Madame Karma though, taking time out of her busy schedule to concentrate solely on making my life a misery. Striking in France is part of the country’s DNA and they’ve been going on so long that even the French, though massively inconvenienced by their own foot-stamping union organised social tantrums, just shrug their shoulders and go, ‘ah we’re French, it’s what we do.’ A minority goad the majority into inaction.

‘What do you think?’ Natalie asked, ‘Should I join the strike on Thursday? It’ll give me a chance to mow the lawn…’

The thing is, many of Natalie’s colleagues would be on strike so she would be one of a few teachers in school, effectively babysitting a gaggle of pupils who bothered to show up.

‘Yeah, why not?’ I said, notifying Madame Karma immediately of the confidence I had in my own plans. My flight home on Friday was cancelled then, somebody at Tours airport, from a workforce of about six people, presumably deciding that they too needed to mow their lawn. I can’t pretend it didn’t crush me. I stared stunned at the Ryanair text, followed swiftly by the confirmation email. I looked like a man who had just had his insides kicked out. I’ve had strike cancellations before, many of them, but I’ve always had a swift back up plan, a foresight that means I’ve never been more than a few hours inconvenienced. Even proud of the way I could deal with whatever strike disruption would come my way. This was the first time in 15 years that I’d been beaten, and along with the illness, the chronic fatigue and the necessary winding down of the amount of travel I can do, it felt like a massive defeat. I felt like a deposed silverback, and now it was time to limp off into the distance.

I moped around London on the Friday night, making and then breaking promises to meet friends. The pain was intense, the new medication not up to the job, so I fell back on old, equally unhelpful medication, a Vin Gris, and sulked in my hotel room wondering what horrors would await me on Saturday’s journey. I knew it would be a battle and I wasn’t sure if I was physically or mentally up for it. I expected more cancellations, a lot of painful walking, confrontations with rioters, petrol shortages should I even make it back to my car. I was prepared for the worst and sat stony-faced in St Pancras, a thousand yard stare for anyone who made the mistake of trying to engage me.

Then I noticed the boy.

A smartly dressed boy, about 12 years old, was walking towards the public piano and my heart sank. I looked at the boy, then at the piano, my lip curled. I honestly thought that this would be the moment, the moment I finally snapped, finally broke down. The boy sat on the stool and stared at the keys, probably looking for a PS4-style hand controller, I thought. Don’t do it, son, I said quietly, don’t do it.

For the next few minutes he played the most hauntingly beautiful, light as a feather version of Louis Armstrong’s ‘What a Wonderful World.’ It was stunning and everyone around him applauded, surprising him and making him blush, hopefully with pride. I turned away and tried to hide my tears.

The world is in such a hole right now, and it looks like it will get worse before it will get better again. My pain is constant, my mood low even on a good day and it’s easy therefore to see everything, the world and all its people, with a jaundiced eye, a defeatist ‘what do you expect?’ sneer. But that boy proved me wrong. I got home eventually, on the Saturday evening, slightly broken to be honest, definitely worn out and frayed. But that boy on the piano helped enormously and I’ll never forget it, there really is hope and I didn’t think I’d ever be the one saying it.